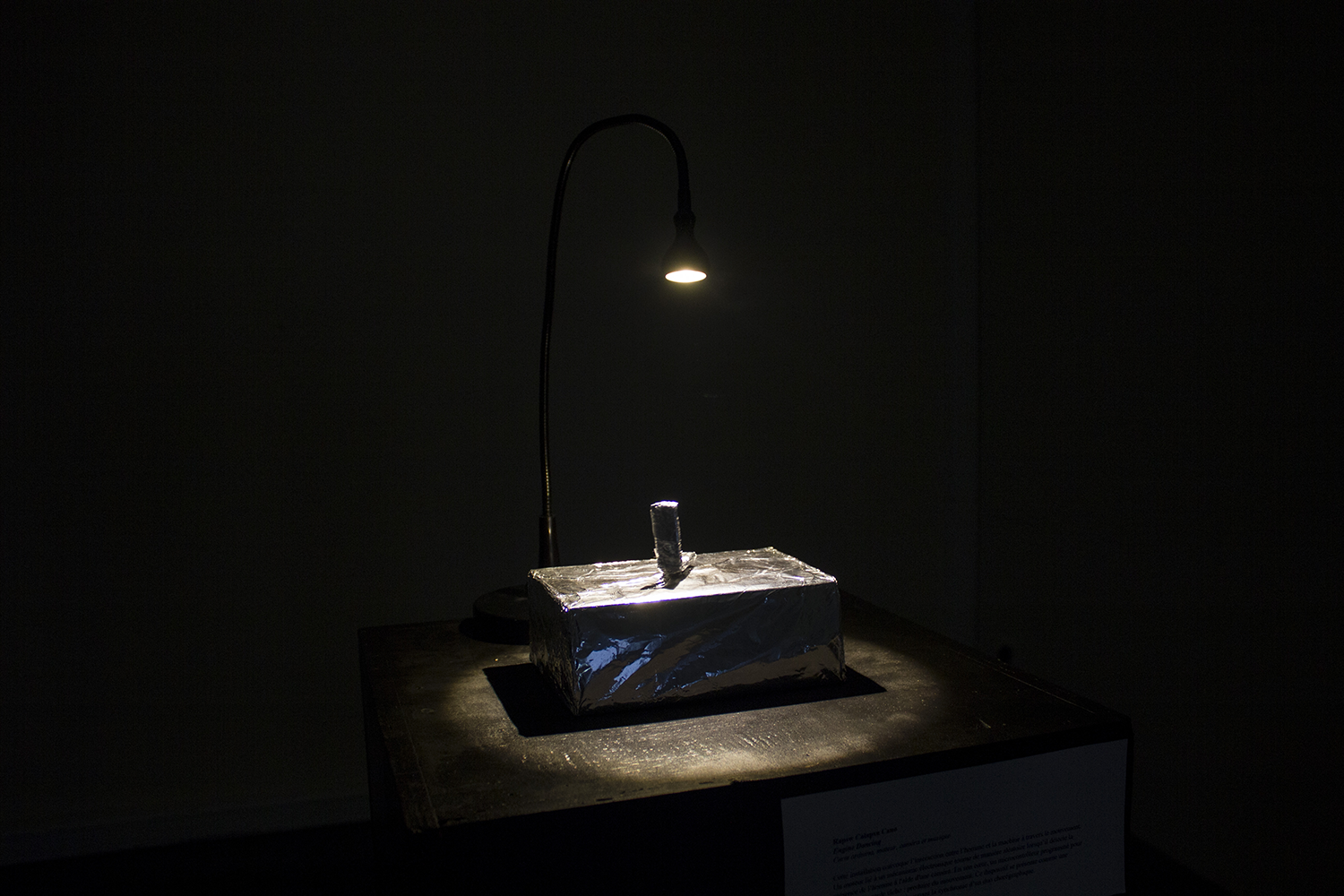 The workshop "Digital Arts and Creative Programming" was set up in October 2019 by the Espace Culture of the University of Lille and ended at the beginning of March 2020. It was directed and supervised by Antonin Jousse.
The main objective of this workshop was to build a dialogue on the digital, its uses and the specificities that the participants wished to talk about. Everyone took this term from a different angle according to their own concerns to render it in the form of a visual work.
The workshop led to the creation of five installations (one per participant) dealing with the impact of digital technology on the environment, the monitoring of social networks, the relational effects of these tools or their capacity to create relational moments.

Here is the list of facilities presented by the participants: 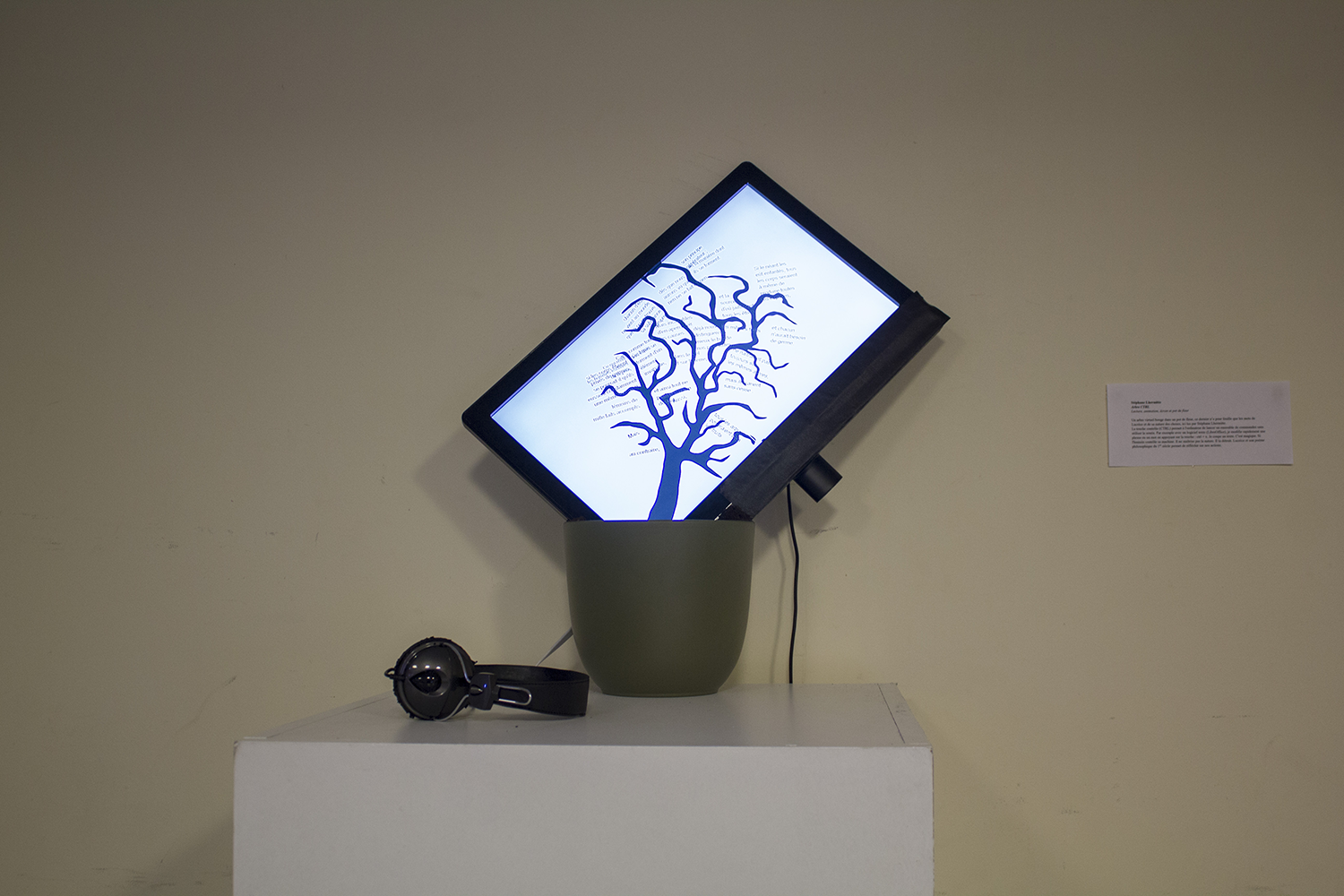 Stéphane Lhermitte, Arbre CTRL
A virtual tree is moving in a flower pot, the leaf of the pot has only the words of Lucretia and her nature of things, here read by Stéphane Lhermitte. The control key (CTRL) allows the computer to launch a set of commands without using the mouse. For example with a text program (LibreOffice), I quickly modify a sentence or a word by pressing the key: ctrl + x. I cut a text. It's magic. If the human controls his machine. He does not control nature. He destroys it. Lucretia and her first-century philosophical poem allows us to reflect on our actions.

Rapsw Calapsu Cano, Engine Dancing
This installation summons the interaction between man and machine through movement. A motor linked to an electronic mechanism rotates randomly when it detects the presence of man with the help of a camera. At its heart is a microcontroller programmed to perform a single task: to produce motion. This device is presented as a form of dance to come ... evoking the synchrony of a choreographic duo. 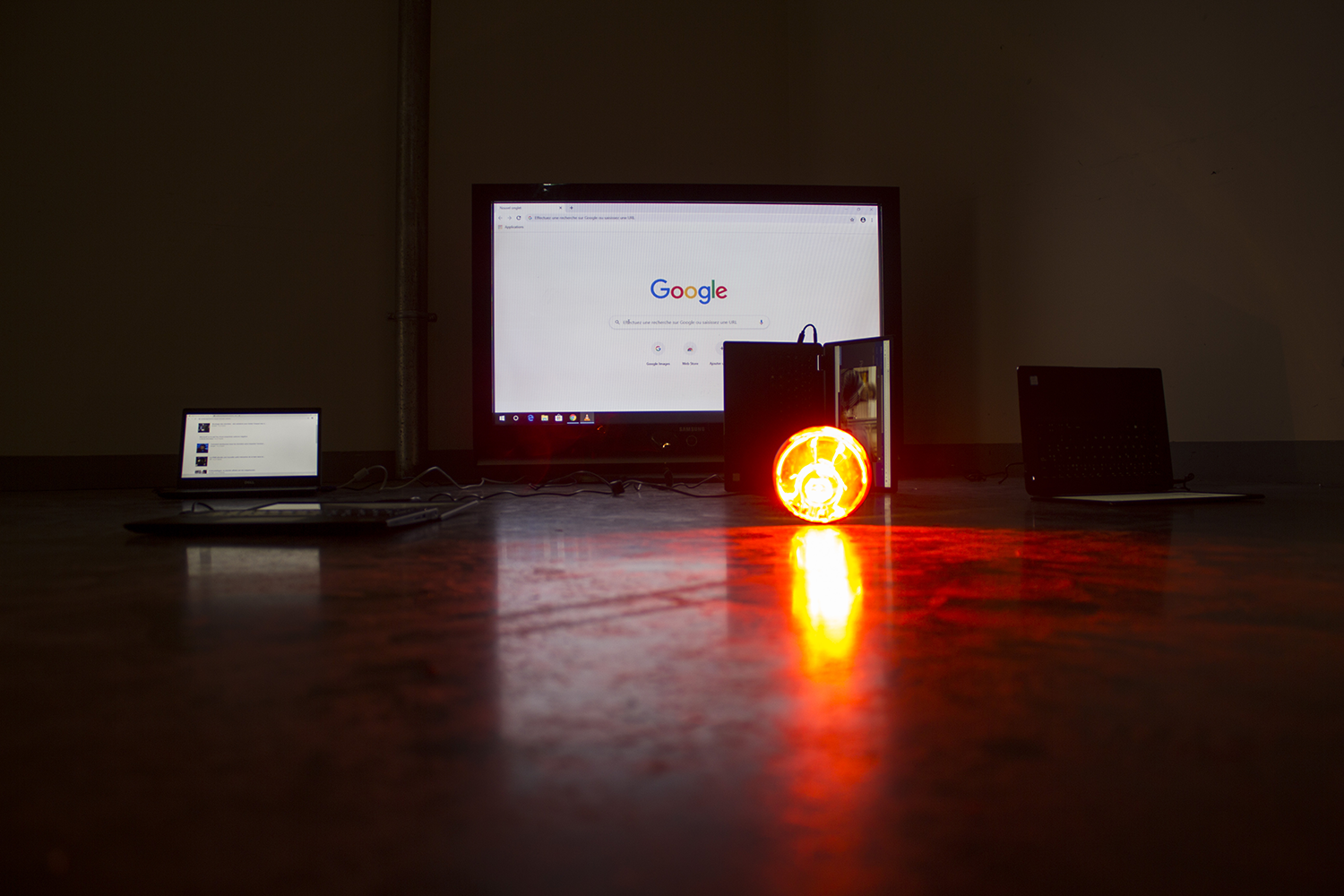 Chloé Curien, Data Heater
Five computers google, research global warming and ecology. A red light is ahead of them, projecting its warmth towards the audience. Data Heater shows the link between the accumulation of data collected by the computers and then stored in energy-hungry data centres, and the current global warming, produced in part by these data centres, symbolised by the heating lamp. 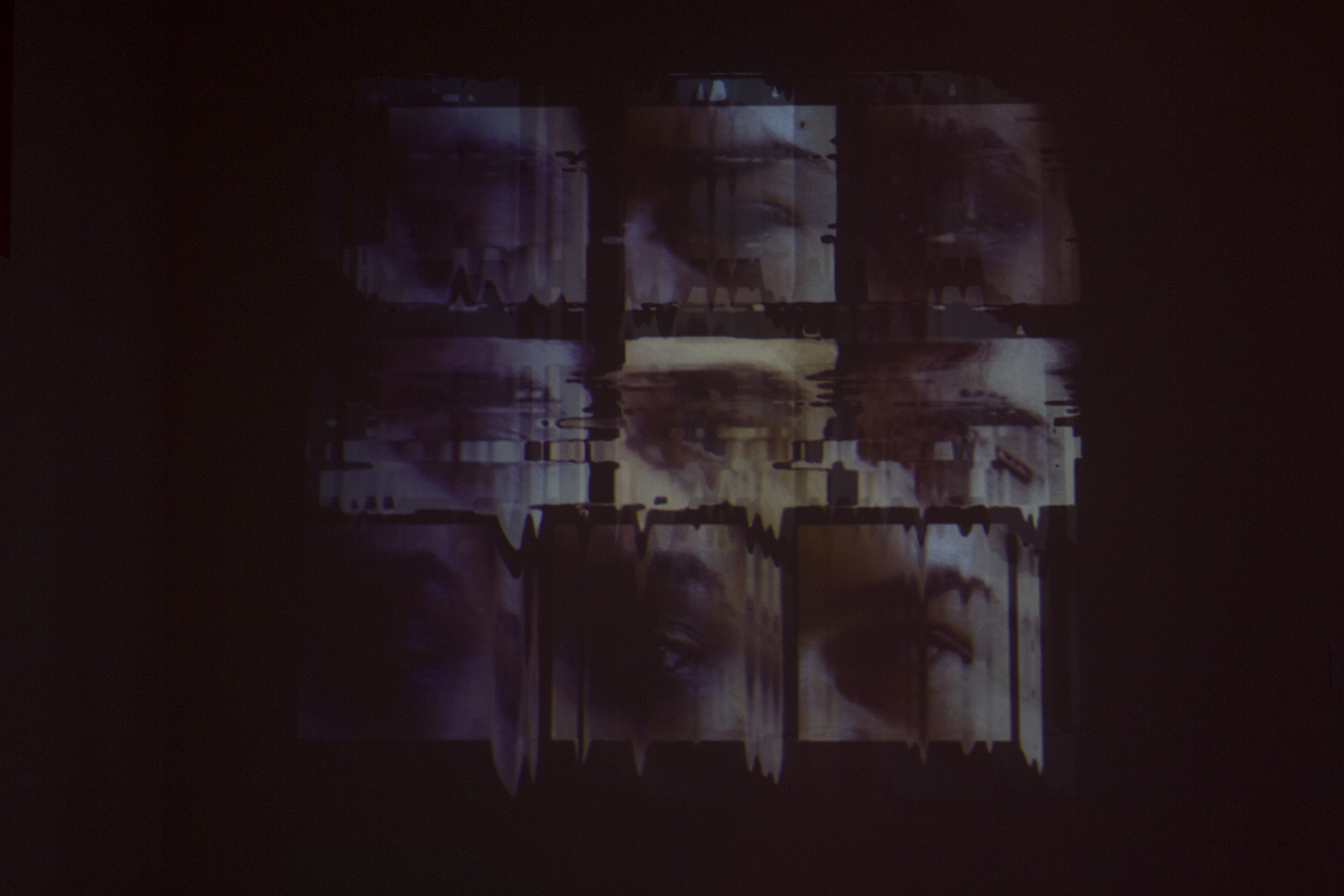 Fayza Ali, ERROR 404
Via an interface similar to that of Instagram are projected on a black background nine restless eyes, while white squares decorate the floor. In the age of computer tracking, any online action is observed. This is what these nervous eyes, pointed at the viewer, represent. The squares on the floor represent white areas, both a symbol of non-connectivity and protection against this tracking and a target for the program. As soon as the user is on it, a glitch appears: the communication is cut off. Error 404. 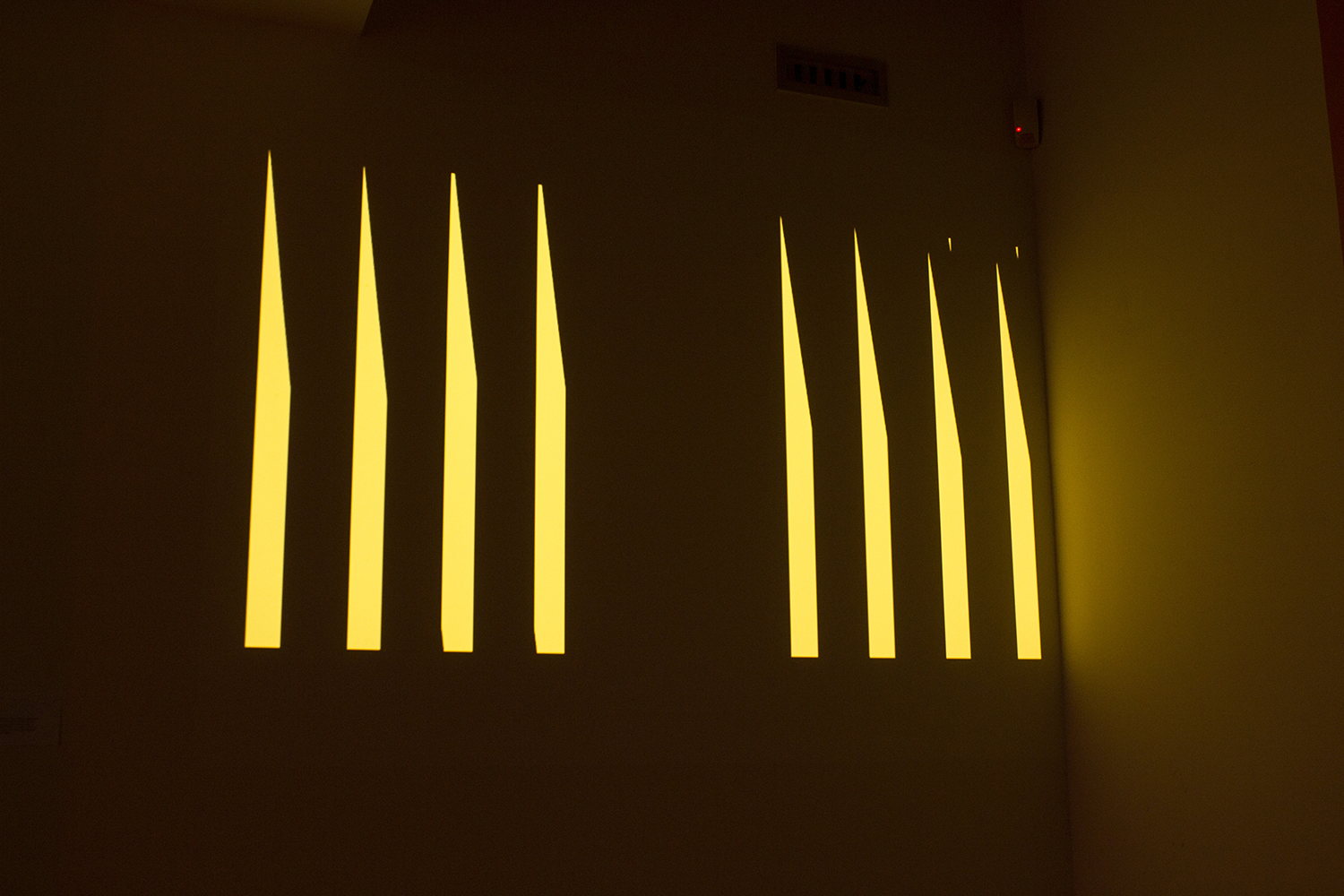 Luisana Rojas, Maiquetía (D’après Cruz-Diez)
The present projection is a digital interpretation of Couleur Additive in the central hall, by the artist Carlos Cruz-Diez, in the Simon Bolivar International Airport in Venezuela, Luisana Rojas' native country. This work represents the distance between people, especially between Venezuelans inside the country and those outside. Through the chromatic lines in movement and the central black space, this animation symbolizes the movement and this distance to the native land. 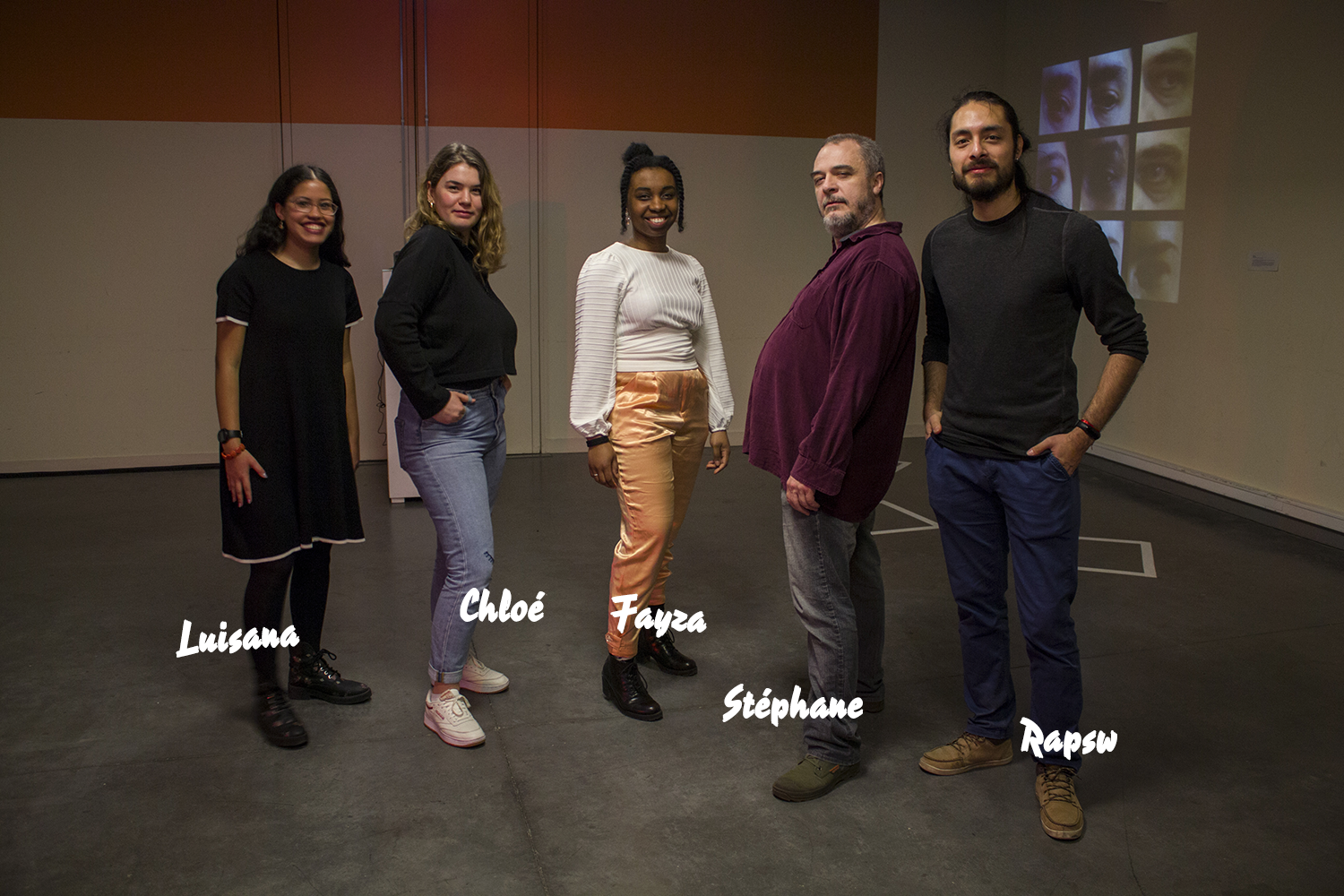